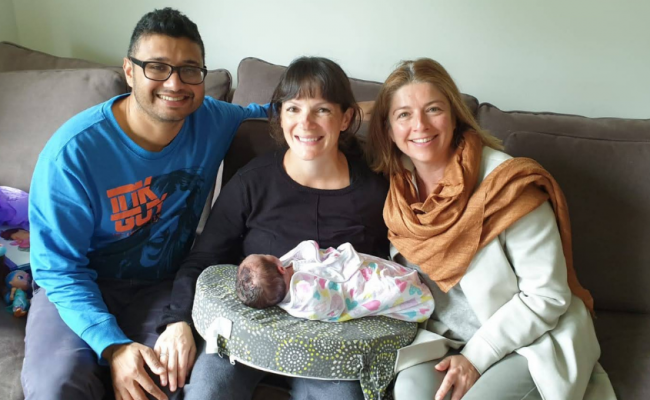 Why do you feel this Daddy Doula deserves the award?

My husband was my rock in the lead up to, during the birth and in the 4th trimester (which we are currently still in).
He fully immersed himself in all things She Births®. We completed the course online together and it took us so much longer than the allocated time as we were discussing everything and had to keep pausing the videos lol.
During my pregnancy, there were a few decisions that needed to be made and Habib was always so supportive of me and what I wanted to do.
There were weight concerns, possible velamentous cord insertion, extra scans needed, the stress of COVID, pushing for our doula to be allowed in the birthing room (when the hospitals limited the number of support people) and pushing back on inductions post 41 weeks. Habib was there every step of the way. Even though he was scared and even though sometimes it probably felt much safer to go with the suggestions of the medical staff, he supported me anyway as it felt right for me.
As a result of that unwavering support, at 42 weeks and 1 day, I was able to go into spontaneous labour and as a result, was successful in achieving a natural vaginal birth (VBAC) that I so desperately desired.
Habib also took 4 weeks off work post-birth. He was there for me in every way you would want a partner to be. He came to every appointment, helped to parent a very challenging 4.5-year-old stepdaughter, changed most nappies, bathed, burped, rocked and sang to the baby day and night, cooked, cleaned, massaged and listened. It just about brings me to tears thinking how lucky I am to have him in our lives.

Here is our story My husband and I were over the moon when we found out I was pregnant. I took a test the day we had our housewarming but it was too early to tell everyone. It was hard not to blurt the news out.
The first trimester was hard and Habib copped a lot of my emotions. I don’t remember crying so much in my life! So hormonal! Very irritable too and quite nauseous. Thankfully that all calmed down for the second trimester as that was hard for other reasons! COVID was ramping up and we were suddenly thrown into working full time from home and having my eldest daughter with us full time during the day. Preschool was still open but we were erring on the side of caution and basically hibernating. It was hard to focus on the pregnancy very much during that time as we had so much stress with trying to keep Chelsea entertained whilst working full hours.

As my first birth was quite traumatic, we decided that we wanted to have a doula with us for the birth and were struggling with the rules of only being allowed to have one person in the birthing room (due to COVID). I was emailing politicians, calling the hospital staff and begging for special consideration.
On top of all of that, there were concerns about the cord attaching to the placenta in a different way (velamentous cord insertion) and weight issues with the baby. There was also a little scare with bubs movements and I rushed into hospital to be checked (everything was fine).
Thankfully by the third trimester I was feeling good and was able to go off on mat leave early to spend some time with Chelsea (eldest daughter). The support person rule was also lifted and we were confident we would have Nadine our doula with us. We were excited! We leapt right into all things She Births® and studied birth-related info most nights.
By 41 weeks baby was still completely happy on the inside and was showing no signs of being ready to come out. The hospital was keen to book an induction but I pushed back on it. There were concerns again about babies size and the head of obstetrics advised me to have a scan to check that baby was ok. Nadine was there with me thankfully and she was super supportive. I was also reluctant to have an induction as I knew it would decrease my chances of the VBAC and water birth I so desperately wanted. The baby was fine and we were given the go-ahead to proceed with waiting for spontaneous labour.
As we were nearing 42 weeks, COVID was looking to be ramping up in our area again and the threat of the rules changing in the hospital were looming. I spoke to a midwife on the team about my concerns about our doula not being there and she got written consent from the NUM that she woul 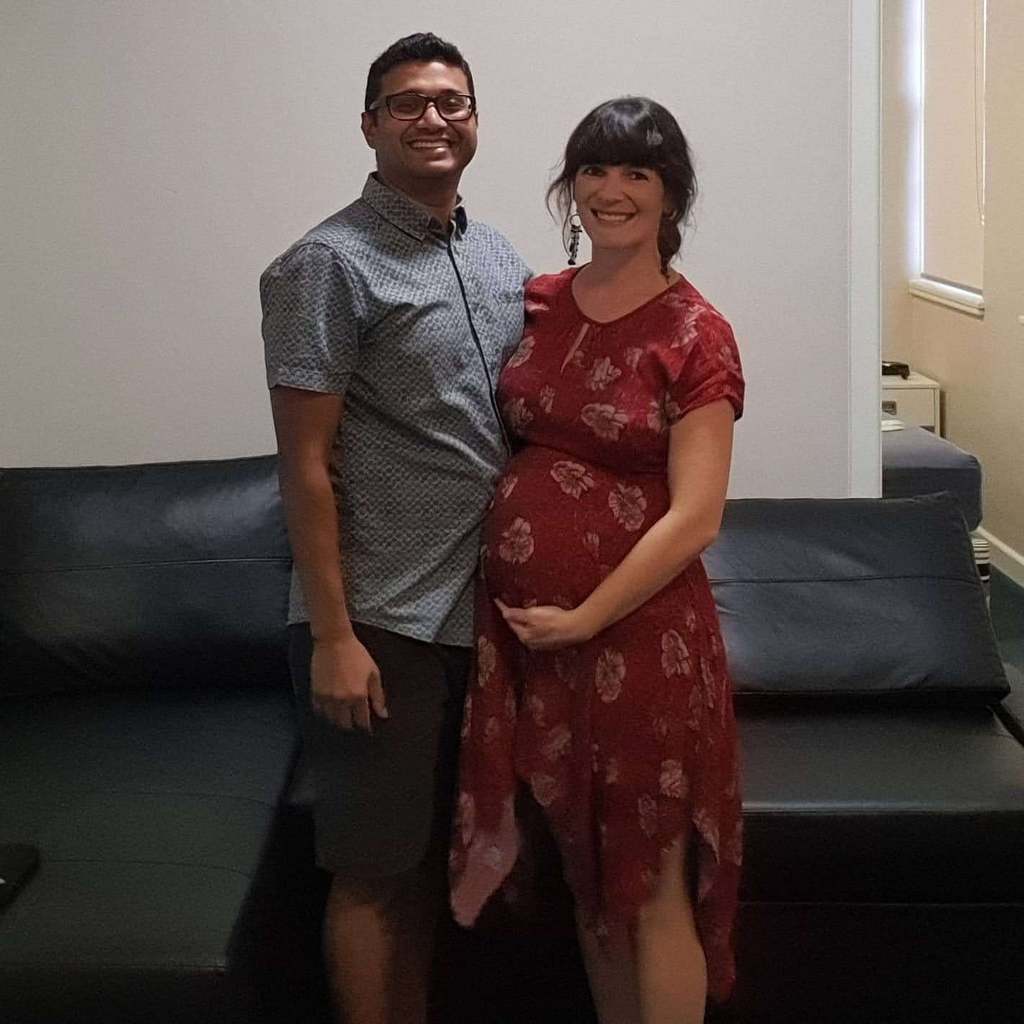 d be allowed in, even if the rules changed over the weekend. The rules changed over the weekend and so we were so lucky that we had got that written consent beforehand!
I was quite anxious about the induction but was trying to read positive birth stories and get my head ready.
In the early hours of Sun morning (42 and 1 day) I had a bloody show. I was so excited as I felt like labour wouldn’t be far away and I was right. 2 hours later labour started very swiftly at 5 am.
I got up and turned on the She Births® playlist and started swaying in time to the music. The contractions were ramping up quite quickly and I asked Habib to turn on the tens machine for me and start measuring the contractions.
By 6:15 I asked Habib to call the midwife and check if it was time to go to the hospital. I was having 3 contractions in 10 mins that were lasting from 40-50 seconds. The midwife said we could start to get organised and make our way into the hospital. I asked Habib to get organised quickly as I felt like it was getting more intense. We left soon after and advised Nadine on the way to meet us there.
Just as we were driving into the hospital my waters broke. We made our way up to the birth suite and arrived just after 7 am.
Habib set up the room and I got into the shower and asked for all the lights to be dimmed. The shower was providing little relief and my midwife Zara and Nadine hadn’t arrived. I was starting to struggle.
8 am Zara arrived and helped me into the bath. Nadine arrived not long after and Habib got into the bath with me. I was very tense and was breathing rapidly not coping with the strength of them.
Nadine and Zara helped me to relax back onto Habib in the bath but I was really not coping. On top of that Zara was not getting a good reading on the baby’s heartbeat via the monitor.
I was barely able to speak but started asking for an epidural. A few things were suggested but gas was the one that worked best as it forced me to breathe. It was suggested I get out of the bath so that monitoring could be checked and we could see how many cms I was.
8:30 am-ish On the bed it was discovered I was 8cm. There were concerns about the babies heart rate though and Habib had to press the emergency bell to get a dr to check me. We were given the ok to keep going as the DR could see that the baby would be coming soon. Gas was keeping me going but I was mentally not coping well.
Zara suggested I turn to face the back of the bed and lean over it (it was upright) and I started coffee plunger pushing whilst leaning over the back of the bed.
Not long after 9 am Zara asked me to turn around so she could get a good monitor of the babies heart rate. As there were concerns I was encouraged to actively push and really try to get the baby out. 9:15 am the babies heart rate was getting worse and Zara asked Habib to call the emergency bell to get the DRs back. Dr checked and recommended vontuse and an episiotomy. Zara asked to give me one last shot before as the head was in view. I was so over it that I was happy to have whatever the DR suggested and would’ve signed up for a C-section at that point. I’d lost all faith in my body to be able to do it. Zara told me to push with all my might and I did and the head came out. Waiting for the last contraction felt like the longest wait ever but we got there. I did the final push and the baby was put straight on my chest. Habib was very emotional and told me later he was so relieved I wasn’t in any pain anymore and we (baby and I) were safe.
Zara asked if I wanted to wait for the placenta or get the needle and I said: “get it out”! Haha. As I was birthing the placenta the cord broke. Thankfully Zara encouraged me to push and I was still able to get it out without needing surgery.
The afterbirth was so surreal. There was plenty of beautiful skin to skin and baby coming naturally to the breast. Habib got to have lots of skin on skin time with her too and Nadine went to buy us some lunch.
All the checks were completed within 5 hours and we were on our way home to rest! It was pouring rain and Nadine was so wonderful and came to help us unload everything at home.
Habib was then on leave for 4 weeks and honestly did not stop. He cooked, cleaned, tended to the baby, played with Chelsea and basically did everything short of breastfeeding. I cannot thank him enough. I was so emotional when he went back to work but it’s been almost 2 weeks now and things are starting to slowly settle into a new normal.

Describe your birth experience in 3 words:

Who supported you throughout the birth?

Known midwife, my husband and our wonderful doula Nadine

Because it was so short, it became very intense very quickly and there wasn’t a lot of time to adjust mentally.

What most helped you through the birth experience?

The knowledge of the team I chose to have around me. I was in my zone so had to rely on the team to make the best decisions for me and the baby.

Was there anything that surprised you on the day?

As my eyes were closed I thought Vontuse had been used but I pushed the baby out myself!