Birth Story of Twins Eden and Reuben by Sarani 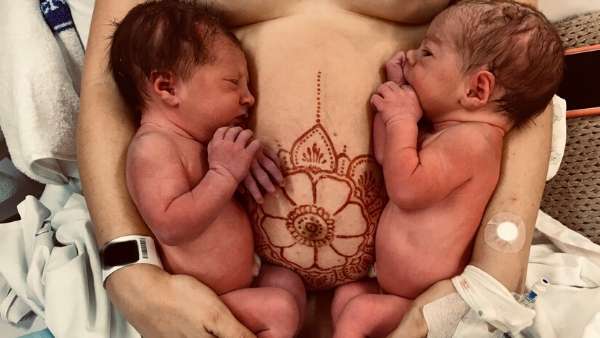 Beatuiful Birth Story from She Births® Mama Sarani who took the Full Online Course to prepare for the birth of their twins. She describes her birth as empowering, calm and beautiful. She found that using the tools she learnt from the course helped her with visualising her birth during the meditations, connected with her baby with the meditations, breathing techniques kept her calm. This is her story xx

When I first found out I was pregnant I was very excited to plan a home birth for my third and final baby. My first two births had been incredibly positive experiences with my second being an accidental home birth. I found out I was expecting twins at 12 weeks pregnant, which automatically ruled me out of my home birth and labelled me as high risk.
Because of the twins, I was having a lot of growth scans; had one at 36 ish weeks and that showed that both baby’s growth had dropped off a little and twin b was sitting at around 2.3kg which worried the doctors and they ramped up the monitoring so I was having super frequent CTG. They wanted to induce me the next day (Wednesday 18th – 36+5) but I declined as I didn’t feel that the induction was so necessary; apart from their growth, twin b was moving normally and showing great CTG traces, and I felt like extra development was the best idea, and also planned to go into spontaneous labour.

I fully expected to go in to labour any day after – some nights I was having mild surges that kept me awake but didn’t amount to anything.
I started to get anxious about the coronavirus restrictions, especially with how many support people were allowed in the birth suite, and twin b’s growth amongst other things so when I saw the OB the next Wednesday (25th) I agreed to induction the following day. I hoped that all it would take was having my waters broken and that my body would do the rest.

On Thursday 26th (37+6) my private midwife Meg and student midwife Izzy met at the hospital and got the room all nicely set up with my affirmations and some LED candles. Waters were broken at 8.25. Initially, they said they’d give me an hour before starting oxytocin but I asked if we could have two – to me an hour didn’t seem long enough at all.

I started having mild surges just before 9.20 and thankfully they increased in frequency and intensity to the point where I hopped in the shower with Andrew cuddling me and rode a few waves in there. After a while I asked everyone to leave so that I could poop (haha) and then all of a sudden started to feel the surges change. They’d put a mat on the shower floor and I got on that and leant over the birth ball and could feel the baby coming. Everyone came into the room and she was born at 10.36 am! It’s funny that I didn’t really feel like I had any intense transition contractions. She was born into Izzy’s capable hands and she passed her straight to me. We had a few minutes of cuddles there.

They then wanted to get a scan of twin band he hadn’t loved losing his womb mate so they wanted to break his waters and get an electrode on his head. I agreed to that so they cut Eden’s cord and broke twin b’s waters. Then he came! I turned over slightly to birth almost on my side, and Andrew caught him and announced that he was a boy!! He was born at 10.55.

Eden was 2.54kg and Reuben 2.38 so very small.
Am so happy with how the birth turned out! I had a very hard time negotiating with the OB about not having an epidural and a few other things. I know I could have birthed these guys at home but midwives can’t attend twin home births, so this was the next best thing. The staff in a birth suite at the time were very respectful and lovely, no paeds came in as I requested, we had delayed cord clamping with both babies, and only 1 doctor and 2 hospital midwives so absolutely the best situation.