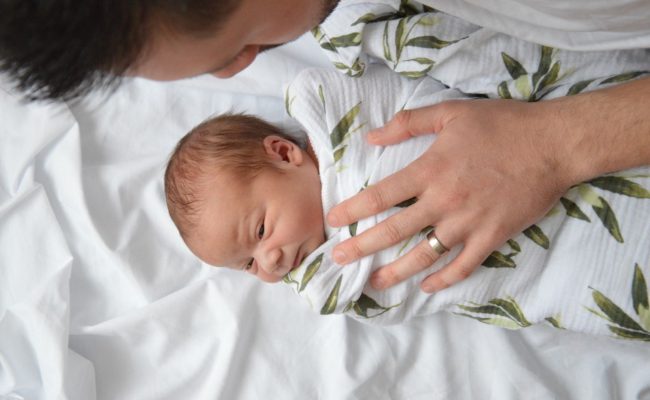 A birth story from Luke to introduce you to their new beautiful little girl – Tallulah Mae. She was born on 27.4.20 at 1.44 pm. They wanted to say a HUGE thank you to She Births® and to also tell us their birth story.

When Steffani first went into Labour, I was very excited. She was 41 weeks so we were expecting the bub to arrive any day now. She was 2.5cm dilated on Friday morning when we saw our obstetrician, so knew we just needed to relax and unwind on the weekend, while still moving. We went for a nice walk along the beach and listened to the waves. Water and waves were a big part of visualisation for Steffani, and we knew it would help soothe and calm her. We then spent the rest of the weekend reinforcing positivity, watching oxytocin inducing movies, practising breathing, massaging and acupressure. We had been doing massages since about 30 weeks and acupressure since 36 weeks. This is my first part of thanks. The advice and guidance you provide partners was just so helpful. It allowed me to know exactly what to do during the third trimester, and how I could help Steffani. I’m so grateful for guidance as to how I could really help her relax and unwind, so thank you.

As mentioned, when Steffani first started experiencing surges, one of the first things I did (besides tracking the actual contractions), was refer to my She births course notes (which I had also summarized into notes on my phone). I quickly skimmed through each stage of labour, and straight away knew what my role was. I’m so thankful for this because it meant I didn’t panic, but I could remain calm, but also certain as to what was happening/needed to happen.

We got to the hospital and provided the midwives with our birth plan. This was hugely helpful, and our midwife was amazing as she followed it to a tee. By encouraging Steffani and me to really visualise the perfect birth for us, we were able to give ourselves the tools to help achieve that. I quickly set up relaxation music, placed fake candles around the room, and lit dim lights. I also stuck the visual birth plan on the wall and all the affirmations that Steffani had written (pics attached). This was helpful for me too as it allowed me to verbally encourage her with those affirmations when she was experiencing surges.

Two key things from the She Births course stuck out for me, and though small, they were so helpful. One was horsey breath/breathing, and the other was drinking water through a straw. We originally practised all breathing by counting numbers, but come time of the actual labour, I very quickly found out that counting wasn’t right for Steffani. What was helpful was just constantly reminding her to breathe, but what was more helpful was actually doing the breathing with her. Radha, you mentioned during the course that sometimes during labour the woman can’t quite hear you actually telling her the breathe, but if you personally do the breathing, like horsey breath, she would mimic your action. This worked amazingly and really helped me help her.

As mentioned, the other was drinking water through a straw. I would have had no idea about this prior to the course, but the best thing we did was buy a water bottle with a built-in straw. This meant I could constantly keep giving it to Steffani in between surges.

In transition, my little she births cheat sheet told me that when Steffani was nauseous and unsettled, we were up to the transition part of the birth. It was hard to see but it was helpful knowing that it was the common reaction. At about 8-9cm dilated, she was begging me for an epidural, but we had discussed this previously and I knew that it was something that she wanted to try and avoid. Our midwife was incredible and kept encouraging her as well, as she had clearly read through our birth plan. Steffani did end up using a little bit of gas, as she had tried pushing during transition, and the cervix had swelled up too much. The gas helped to distract and relax her in between surges and through the information we learnt in She Births, we decided that the gas, at this point, was going to be positive and help reduce to the need for any other additional intervention.

When she finally got to 10cm dilated and could start pushing. After 2 hours and 15 minutes of just an incredible effort, Steffani was able to birth little Tallulah, with no problems or tearing. It was incredible and exactly as we imagined the birth.

There are countless other things that helped, but a lot of the small little things we learnt really helped me stay calm and controlled, and in the right mindset to support my wife during this time.

I have felt like I’ve rambled, and my thoughts might be a bit all over the place, but that’s only because I am honestly just so thankful and grateful for the course. It allowed us to feel really educated and informed about our decisions. Most importantly, everything went so smoothly for Steffani, with no medical intervention and no tearing at all! It also meant that we got a healthy, happy baby out of it which I’m eternally grateful for. I could not advocate for She Births highly enough, and for me, it was just the perfect resource to be able to help Steffani with what I could.

You guys are the best. ❤️