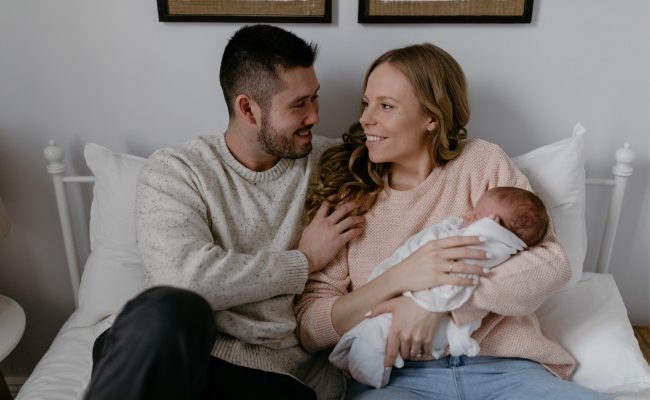 Our labour story started on Monday morning at 1 am 1 week after my due date. I woke up with some slight cramping that felt like period cramps. I went to the toilet and returned to bed with the cramping still continuing. I decided to not wake Luke because I thought he needed as much sleep as he could get, however after another 2 strong cramps I decided to wake him. As soon as I woke him the surges started coming hard and fast. Within 20 minutes I was experiencing 3 surges in 10 minutes – I breathed my way through them and we called the hospital to ask what we should do. The midwife suggested waiting half an hour to see how I went. I hopped into the shower whilst Luke ran around frantically (without me knowing) getting things together – luckily we had packed most things into the car the day before just in case. Just 15 minutes after calling the hospital I was now experiencing 4, minute-long surges in 10 minutes and I started to slightly panic that we weren’t at the hospital (after all this was my first baby). We called the hospital again and decided that it would be best that we headed there. We finished packing the car with almost half the house and the dog. The normally 15 minutes drive took us about 7 minutes (or about 3 surges) – thanks COVID and 2 am traffic. My parents were at the hospital when we got there with huge grins on their faces. They took the car and our beloved pup Stanley and gave us the biggest hug as we walked inside.

We were met by our first midwife who set us up in our room. Luke quickly began setting up the room with fairy lights and fake candles. He put on soft calming music and stuck my affirmations and birth plan up on the wall. The first few hours were a blur. We moved from the bed to the bath, to standing at the end of the bed, to back in the bed – whatever felt comfortable at the time. We breathed through each contraction together. At 7 am there was a shift change in midwives and we were introduced to our angel of a midwife. At the same time, my doctor visited and for the first time in the labour, I asked to be assessed how far dilated I was and to my excitement and surprise, I was 6cm already! The next two hours we treated very much like the first couple – slow and quiet, just as I had imagined and practised in my meditations with She Births®. At around 10 am I had an extreme urge to push – every contraction I couldn’t help but push. Our amazing midwife helped us to again focus on the breath in order to stop me pushing. We moved back to the bed and she assessed me again. I had dilated to 8cm but my cervix had started to swell because I had started to push. She reiterated again how important it was for me to get back to the breathing in order to help me relax a little and reduce the swelling.

At this point – I started to doubt myself, I kept saying that I couldn’t do it, that it was too much and that I needed an epidural. Luke was fully aware at this point that it was ‘transition’ speaking and that as we had planned we wanted as little intervention as possible. The next hour I spent almost clenching my legs together in an attempt to stop myself pushing. Additionally, my midwife massaged my back through every surge and Luke was at my face telling me how much he loved me, how proud he was of me and kept me breathing. At this point, I also decided to try the gas. At first, I didn’t like how the gas made me feel, but after the effects of the first breathe wore off I decided I liked it and wanted to keep using it. The biggest benefit for me was that I had to think about my breathing when using it. I was forced to do big breaths in and out. I also found that it helped me to rest better in between contractions (which after only having an hour sleep in the last 36 hours made a difference). About an hour passed and I asked to be assessed again, I was 9cm and I felt a little defeated but my midwife assured me that my cervix felt very different and that all the swelling that I had previously, had gone! At this point, my waters still had not broken and she asked if I wanted her to break them – due to the pressure I was already feeling at the time I said no. Another hour of breathing, a bit of gas and saying I couldn’t do it and that I never wanted any more children and my husband and midwife constantly telling me that I was doing it, I again begged to be assessed. At this point, it was about 11:15 and I was finally at 10cm dilated! I was elated and so excited that I could now start pushing. My midwife coached me through each surge and after a few pushes standing up at the end of the bed I realised I was exhausted and again was saying that I couldn’t do it. At this point my midwife took off one of my written out affirmations from the wall and placed it in front of me, ‘I am strong’ it said, and that became my new focus. My waters still had not broken and I saw my midwife put on goggles and a mask, she said that it was just a precaution as she was having to stand underneath me to see where the head was and we all had a good giggle. I decided at this point to push from the bed because I was so tired. I started off on my side and as my midwife could see the head more and more she was excited that bubba would be born in the sac! However, within about 5 pushes of her saying that we all heard a huge ‘pffshhhhh’ sound and out of the corner of my eye I saw fluid shoot across the room. We all had another giggle and Luke and my midwife were glad they weren’t in the firing line – my midwife proving why she had put the goggles and glasses on.

I continued on with pushing and it soon came time for my midwife to call our obstetrician which was a huge mental thing for me as I knew that we were close enough to meeting bubba for our obstetrician to come. He arrived and my midwife asked if I wanted a mirror, I quickly said ‘oh gosh no’ but she said ‘I’m going to get one just in case you decide you want to look’. As soon as they all started saying they could see the head I decided I wanted to see – I think this was another amazing decision I made as I could actually see the progress. With every push, I could see more and more of the head. As I started fatiguing again and so my midwife suggested I try a different position and I decided that I would be comfortable on my back. Although I knew what I learnt in the course, I also felt that I was going to be more comfortable so decided to go with this (another example of just doing what felt right). I kept pushing with each surge and soon enough I was breathing to get bubbas head out. ‘Ohmygosh there’s a baby’ I exclaimed as bubbas head was out. My doctor responded with ‘yes, I diagnosed you correctly’ and we all had a good chuckle as we waited for the next surge. I remember the silence there was in the room in the 3 minutes between contractions just in awe of what was happening and had happened. After 2 hours and 15 minutes of pushing the next surge came and I pushed out the rest of bubba. Luke was then able to lift her onto my chest and it was the most incredible moment of my life – all of which our midwife filmed for us which I am SO grateful for (I literally watched the video back that evening).

4 short minutes later I delivered the placenta without the need for an injection.

I delivered a 3940g baby with no tearing, just a few grazes which required only a few stitches (just to help with recovery), and I never believed it but tearing is literally THE LAST thing you think about in the moment, so is opening your bowels in labour, being completely naked in front of strangers and so is getting stitches – there is so many other (more incredible) things going on that these are things that don’t even cross your mind!

Giving birth was the most intense and most amazing experience of my life. I couldn’t have done it without my beautiful husband, my beautiful midwife, my amazing doctor and everything we learnt from the SheBirths course. We went in with the knowledge and confidence in the decisions we were making, the way we had prepared and the environment we created to birth our beautiful baby girl.

We will forever be thankful for the SheBirths course. We are recommending it to every one of our friends in the hope that the fear around birth is reduced.

Thank you again a million times over!