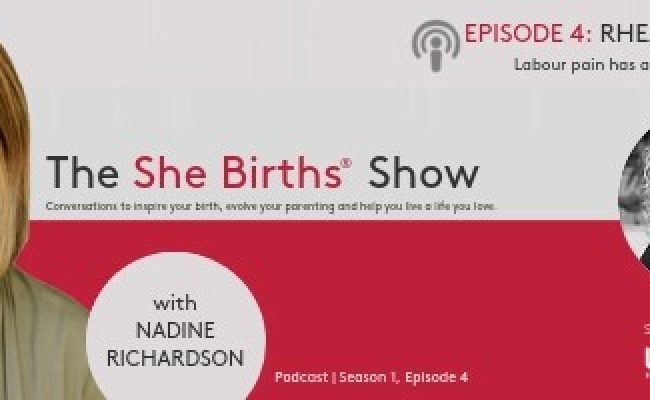 Welcome to Season One Episode FOUR of the She Births® Show Podcast.

This month I spoke with with counsellor, fellow doula and birth educator Rhea Dempsey. Rhea is author of Birth with Confidence, a must read if you really want to face your fears and understand the culture of birth and how it impacts us all.

She has helped over 1,000 women give birth and is currently writing her second book – which we are really looking forward to.

The fact that Rhea has been attending births for over 30 years means she was around before the epidural arrived in the early 80s. Even though only 13% of our She Births® mums have an epidural – I would have loved to have been doula’ing in those days because so much was different, in the attitudes and the culture of births – the time lines, the expectations and the belief system around pain.

Rhea and I have both witnessed a huge increase in the phobia of childbirth, especially the fear of pain. But we ask the rather controversial question today …what are women actually missing out on when they don’t feel some of their labour – without the natural orchestration of their hormones (Dr Sarah Buckley went into detail on this in Episode 1)  do they experience the shift in brain wave patterns into an altered state of consciousness…into a deeply connected state with nature and their baby that possibly even helps you parent with more ease and responsiveness?

We also discuss how past traumas can be a hindrance but also healed during birth and how birth is an ego-dissolution process – that ties very closely to the underlying purpose of pain. Cultures differ and our sub conscious attitudes towards birth really matter – the views of those around you will deeply influence the way you birth – so much more than most of us realise. Rhea believes that modern birth has become far too focused on comfort, convenience and control.

My favourite is when we talk about the different archetypes of a doula – knowledge that will help you make the best choice for your family I am sure.

Like me and a lot of us who live in the very raw and real space of birth – Rhea also swears a wee bit – so
I hope you forgive us and enjoy the show.

Listen here, leave us a review and share with your friends and family

“Labour pain has a purpose. Trust it”

Rhea Dempsey has worked as a childbirth educator and counsellor for over 30 years.

A fierce advocate for natural birth, Rhea’s work began in the 1970’s when home birth was a bit of an underground scene and epidural hadn’t been invented yet.

In this episode of the She Births Show podcast she tells Nadine that she’s witnessed an unprecedented rise in medical intervention during birth in a bid to avoid the pain of labour – to the detriment of the woman’s overall experience.

‘Our collective crippling phobia of birth’

“We don’t as a culture value the labouring anymore that is not seen as important anymore,” says Rhea.  “Pain is no longer seen as an expression of a body working hard and has become a real hurdle that birthing women feel they have to overcome.”

Rhea says the modern birth approach has become too focused on comfort, convenience and control.

Rhea says these words demonise the pain of labour, pitying women them and giving us the message that they should be in completely in control of their bodies without ever “surrendering to the great mystery of birth.”

The purpose of pain

“When I first started working as a birth educator, pain was just part of the deal…  Instead of medicalising it, we saw birth as a psychosocial experience. That is we saw the emotional blocks in the mind and the heart, that could get in the way of labour,” says Rhea.

“They are the moments when a woman is in distress at a particular point in her labour – usually around 6-7 cms. Often, we confuse these moments as the woman being in transition – but I see them as an emotional block. Much like when a runner or swimmer hits a pain barrier – when they feel like it’s all too much and they don’t want to go forward.”

Rhea says in the hospital setting medical intervention is considered the go-to response in these moments, but she believes that is the wrong approach. Instead, she says at these points women need help to go inward.

“And in those moments, we started to focus on what was going on for the woman and her life? Many people can do lots of things with their bodies it’s what that the mind and feelings say rather than actually what the body is capable of. And the body will choose to follow what the mind says, instead of its true capacity,” says Rhea.

Can you heal these emotional blocks before you give birth?

Rhea says there is no doubt a woman’s emotional history or trauma can impact her transition to mothering, so being aware of your life story can really help.

“The transition to mothering is embodied in the birth process. If there are any issues with family or partners or life trauma and experiences, birth can be more of a challenge. Women should be encouraged in the pregnancy to work on those things, “says Rhea.

But for women whose issues or past may be buried further into their subconscious, birth can be a wonderful space for healing.

“There is so much good energy around you in birth and so many good people. The potency of the energy is so great because there are good people there ready to witness and hold and honour your pain. It’s a transcendent power that can help you burn away some of that old stuff,” says Rhea.

What did women do before epidural?

This unpacking of a woman’s emotional history was one of the go-to methods for Rhea and other birth educators working in the pre-epidural era.

“If pain got too much or dilation didn’t happen then we would be reading the emotions,” says Rhea. “We’d also use massage to really work with the pain, rather than numbing it.”

Rhea says the arrival of the epidural in the 1980s was initially accepted and welcomed as an option for women and babies in deep distress, but Rhea says now it’s used too carelessly.

“Sadly, now we apologise that we did not have the foresight to understand that those epidurals would come to hijack just about everything about natural childbirth. And now they are embedded in everybody’s brain that labour could be pain-free. Socially and culturally it’s considered: the answer.”

“Many first-time mums have aspirational values about “how” they will be in the birth but they are not necessarily lived values about how they feel about their body.  The idea that their birthing goddess will just “come out” without having any lived experience as to what they might take,” says Rhea.

She encourages pregnant mamas to investigate their birthing options and “be on the case” about the choices you want to make when it comes to birth. And most crucially, she wants women to trust labour pain.

“Things that don’t go right in birth don’t show up as pain; you can trust the pain as a good sign that your body is bringing your baby down and into the world,” says Rhea.

“The intense brilliant work of the body when that reaches a certain intensity has got to be understood as separate from freaking out pain when women are being hijacked by their anxiety. This is when the pain peaks and then kicks over to the endorphin system – the feel-good hormones that gives you that boost to keep on going and meet your baby.”

Partnership with WaterWipes
She Births® began as a simple community program 10 years ago in Bondi Beach and today we are the internationally recognised scientifically verified birth education course. The relationship we develop with our families spans the entire perinatal period – from fertility to pregnancy, birth and into early parenting – and the majority of couples that study with us maintain deep and long lasting connections. Our community is made up of connected parents, conscious workplaces and dedicated health professionals who engage highly in their choices. They want the best and the purest for themselves and their families.
For this reason, our brand and the select brands we endorse hold great value to our dedicated client base. We regard our partnerships as a further extension of our community. We believe Waterwipes and She Births® share a value system. We are both dedicated to providing best-in-class support to new parents and work in the best interest of each child. We both see the importance of scientific research, and our investment in this is a source of great pride. We encourage you to read how a dad wanted a better product for his daughter and WaterWipes was born.