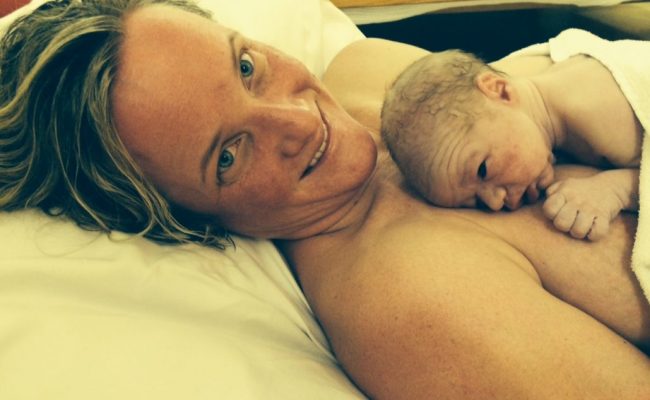 Dear Nadine….I have already recommended your course to many
pregnant friends. Some interstate mates want to know if you’d do one
in Melbourne- take She Births on the road!

I am extremely grateful and also humbled by your generosity of spirit
and knowledge about birth. Without a doubt, the weekend spent with you
helped us achieve the birth we wanted. I am also really proud of
myself and of Reubs for committing to it so fully.
xxxxx

My blood pressure had been high at a few appointments and it peaked at my 39-week appointment (Wednesday). My obstetrician asked me to return the following day to check it again and discuss the next steps. I was afraid of this – my first birth was induced after my water broke and labour didn’t progress and the “cascade of intervention” followed. It was far from the birth I had hoped for and I had focussed on and committed to making my second birth a better experience.

I went back to the obstetrician Thursday, headphones on with relaxing music and alternate nasal breathing during the trip there – anything to make the blood pressure as low as possible! It worked – blood pressure had stabilised. The obstetrician was still keen to “get things moving” within the following few days given where it was at. I was 2cm dilated at this stage, with a cervix of 1.5cm length. I agreed to a membrane sweep.

Contractions and niggles had been coming and going but weren’t regular. On Friday at about 11 am they began to establish a pattern, every 7-8 minutes lasting 30 seconds or so. Reuben was at work but I told him to stay there until the contractions were more consistent. I was calm and doing well on my own. I called the hospital to let them know that things were starting. They suggested that I come in, partly because of my elevated blood pressure. I told them that I didn’t think I was ready to come in and that I would call back again once the contractions were more established. I think this decision was critical in me achieving the birth I had wanted. I had bought a blood pressure monitor and checked it throughout the day to make sure I wasn’t putting baby or myself at risk.

By 4 pm Reuben was home and we walked down to Bondi Beach. Contractions were still coming but had spaced out a bit. By this stage I had to focus on breathing when they came, grabbing on the railing and looking out to sea whilst I breathed slow deep breaths. We made it home and decided that our 2 year old would have a sleep over at my sister in law’s, preventing any need to drop her off in the middle of the night if it came to that. However, I was not convinced that I was going to give birth overnight.

At around 7 pm I had a glass of wine and dimmed the lights, and by this stage, I was either leaning against the wall, getting on all fours, or over the bed for each contraction. By 10 pm Reuben suggested it was time to go to the hospital. I was in two minds, I still wasn’t convinced that my labour had established, and I didn’t want to get to the hospital too early. But at the same time, with the blood pressure level concerning me slightly, I thought that he was probably right and that I could always just have it checked and then come home again if the contractions died off.

We got to the birthing suite at 10:30 pm – the midwives were busy and took until 1130 to come in and examine me, which was fine by me as I was coping well. This gave Reuben time to return home to collect my forgotten handbag and antenatal card. Once he was back the midwife examined me and said I was 3-4cm dilated which was encouraging. The midwife suggested I take a bath, which sounded like a great idea. The contractions continued and were slowly building in strength. The feeling of the water was lovely but the restriction of movement made it a little difficult – it wasn’t easy to change positions. So I ended up on my back during contractions and as each one came I would roll to one side, grab on to Reuben’s hand/arm and squeeze tight, doing long breaths in and out as each one came and went.

Shortly after 1 am I felt my water break in the bath. I stayed in the bath as the contractions got closer and stronger. I varied what I was doing for each contraction – some I pressed my feet into the end of the bath and others I tried to ‘sway’ my body back and forth through the water to distract from the pain. After another ½ hour, I felt the need to get out and have more movement. The first contraction out of the bath was very strong, and I wanted to get back in the water, but my sense was that things were developing quickly. I began feeling the need to push, and a quick exam revealed I was around 8cm but had to hold off from pushing until the final thickness of cervix had retreated.

My breath became heavier, stronger, louder. Now I was making deep guttural sounds with each contraction, leaning over the bed with Reuben applying firm pressure to each side of my hips. The relief I was getting from that helped me decide that I wanted to birth on all fours.

At 2:30 am, the urge to push was overwhelming. Within a few, pushes I could feel her moving down. Birthing her head was intense pain, and I let out a roar, but in some ways the pain was lesser than that of the most intense contractions, knowing that she was almost there. Guided by the midwives, after what seemed like a long break between contractions, only 14 minutes later, my little girl was passed up between my legs and I was helped to manoeuvre back to a back lying position to hold her and deliver the placenta.

I had a natural third stage, and the placenta was delivered 6 minutes later, at which point the relief obstetrician entered the room, with all that was left to do is a check for stitches. With no further attention required, they left us to bond with Saskia until we were ready to shower and leave the delivery suite.

I felt euphoric and experienced an amazing clarity following the birth – we had trusted my body and ourselves to achieve the birth we wanted. These feelings have continued in the weeks since the birth and I’m sure that the gentle birth has influenced the calm nature of my little girl. In the end, I used a limited number of physical techniques I learnt in the She Births course, but the ones I did use were absolutely critical to the birth outcome. The other and more important skill She Births gave me was the confidence to do it.