VBAC Birth Story | The birth of Avi – by Louise Patel 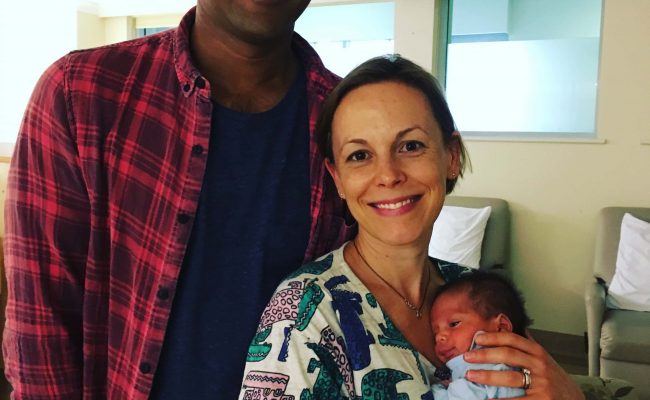 The birth story of Avi

This is the birth story of baby Avi as told by his mother, Louise Patel.

It took Louise some time to be convinced that baby Avi was really coming!

After all, it was only one week before what would be a super-fast arrival, that she and her husband had completed the She Births Weekend Course.

One week before she’d completed the She Births Weekend Course.

“After the course I focused on things that felt important and relevant to me. This included the breathing techniques and when they were to be used, visualisation of the birth from start to end, learning the physiology of the uterus and role of the naturally occurring hormones and the stages of labour and what roughly to expect,” says Louise.

A yoga devotee Louise says she also stepped up her practice and began to spend a lot more time in baddha konasana, upavistha konasana and the squat positions.

“I also took on a few more refinements in my diet according to the information we received in the course,” says Louise.

The following Thursday Louise says she started experiencing some pains. The busy mum of twins put them down to how clingy her toddlers had become.

“I was spending a lot more time carrying them around and I put it down to this. I went about my usual routine going to yoga in the mornings both on Friday and again on Saturday and had spent most of Friday wandering around the markets carrying the kids and shopping,” says Louise.

On Friday night the pains startled Louise in her sleep and by Saturday they were coming every five minutes. Despite the decreasing time between pain sensation, Louise still did not reaslie she was in labour.

“It was too early! I assumed I had overdone it the last couple of days and purely went for a check to get my husband off my back!”

On her walk to the hospital, Louise said the pain started taking her breath away:

“When I arrived at 3:15pm they put Avi and I on a monitor and did a fibrinogen test and established I was in premature labour. I was 2cm dilated. I was given nifedipine to stop the labour with no success and then given steroids to prepare Avi’s lungs.”

Louise says by far the most challenging part of her labour was right after her waters were broken:

“The sensation was intense. I also found the need to push confronting and different to how I expected. I felt I didn’t know how to do this, so I asked the midwives to tell me exactly what to do and after a few go’s I got the hang of it, says Louise.

“I remember hearing about “blowing out candles” for pushing but this was not the case in my situation. I was asked to hold my breath and bear down.”

Louise’s support team were her husband, midwife and her own mum.

As the contractions increased, Louise found her husband’s lower back massage and firm pressure on her lower back very effective.

“The different breathing techniques during the different phases of labour were great for my concentration and helping me to relax in between the waves.

“Understanding the physiology of the uterus muscles and the role of the hormones and how and why these can be disrupted helped me to rationalise the sensation and enabled me to stay focused. It also helped me to visualise what my baby was doing… . By 6:55pm I was fully effaced, Avi was born at 7:15pm!”

“I was taking responsibility and owning the situation head-on”

Louise describes Avi’s birth as “unexpected” and has taught her to trust her instincts.

“I’m stronger than I thought I was …  My twins who were a planned c-section. I felt disconnected during the c-section experience and following the birth. I didn’t see my twins for quite a few hours and I was in a lot of pain and pretty bombed out on analgesia. My milk took a week to come in and my recovery was much longer with the caesarean,” says Louise.

“With Avi’s birth I felt I was connected and in control all the time. I felt like I was taking responsibility and owning the situation head on.”

Louise could not have been more pleased with her birth experience and credits the She Births course for the confidence it gave her to trust herself:

“I have an enormous sense of maternal satisfaction that is hard for me to even put into words. This has been a life changing experience for both of us and we are richer as a result of it. We are so grateful that we did She Births®. You put me in touch with an intuition and knowledge that was already inside myself. It gave me permission and confidence to trust my natural instinct.”