The birth story of River, as told by She Births mama, Lauren Edwards. Describe your birth experience in 3 words:
Intense, physical and positive.

How did your labour start?
I was a week overdue, and I had a stretch and sweep to get things going. It started with normal period pain type of thing and then all of a sudden I lay down and my waters broke. And then I went into full on labour – pretty instantaneously. Straight away I was in back to back contractions and vomiting. We went straight to the hospital and then a few hours later, River was here.

How did you bring your baby into the world?
I was braced up against the bed, leaning against the bed, in a lunge position for about 3 hours and barely moving. My arms are still recovering from that! It was very intense. I thought I would be in the shower, but I found my position when we got to the hospital and I didn’t move.

My partner was behind me and he was a counterweight for me – I was pushing against him through every contraction.

What was the most challenging part of your birth?
I feel like my birth was all mental. It was very intense, in a way that I didn’t expect it to be. I thought I would have time to talk between contractions, but I was having a maximum of 30-second breaks. My doula said she’d never seen labour do that before. It was like I was in transition the whole time.

Every now and then I’d have a sip of water. I kept thinking to myself, “I can do this, I can get through this.” I imagined myself walking up a hill and imagined Nadine’s voice telling me “You can do this. You are stronger than this.”

When I walked into labour ward I said, “Give me the gas, give me the gas!” But as soon as they gave it to me, I gave it right back. I wasn’t doing long enough breaths in or out to take it in properly and having something in my mouth felt wrong.

What tools helped you the most?
Mantras got me through. I remember Nadine saying to get rid of any fear before you go into it. I was really telling this to myself. I practised the visualisations and kept telling myself: I can do this. My body was made for this. And I imagined my body really opening up.

Part of my brain was doing that and the other part of my brain was focused on staying positive. I just knew I had to keep going and that I couldn’t stop. I was on a train and I couldn’t get off. There was no way I could have sat down, or do anything other than what I was doing. The contractions were back to back and sometimes they wouldn’t end before another one would start again. It was almost a relief to start pushing because I could actually breathe.

Who supported you throughout labour and birth?
My partner Ben and my doula, Ange who is a trained midwife. She had done my prenatal checks for 5-6 weeks and we got to know her well.

Did you learn anything new about your partner during the birth?
He felt good being able to do something practical. And we were both a bit thrown by the birth. We’d done so much talking about what it would be like to go through all the stages, and then all of sudden we were in the hospital and it was happening so quickly.

Me needing him was good because otherwise, he would have been standing there and just watching me. Instead, I was able to say to  him, “Push” when a contraction came and he’d stand right up against me for me to lean against. And when I was pushing he was encouraging me by saying things like, “Relax your face. Breathe.”

All of that was great because up until then I wasn’t able to communicate. It was all in my own head. What was the most challenging part of the birth?
Just the mental part was the hardest. Keeping my mind focused and strong and how physical it was. My arms and legs got really sore, and it was impossible to stretch because I was in so much pain.

What did you learn about yourself during the birth?
How strong I am! My mental strength and my physical strength surprised me. I even think it surprised Ben!

What most helped you through the birth experience?
Mantras and mental strength. And knowing what was coming thanks to the She Births® course, and all the things we were taught to think about. Ben’s physical help/support. Was great too. Even when I was pushing he was a squat seat for me – we were both exhausted by the end of it!

What are the 3 aspects of your birth that really stand out now?
How intense it was. How physical it was. I don’t look back at it and think it was horrendous but I couldn’t have done any longer than it was!

I felt I had agency and control, even though I felt very out of control. You are right on the edge and you think I am going to go over the top, but you don’t. It’s like being on a treadmill and even if you don’t want it to be happening, it’s happening.

What did the She Births® course bring to your birth experience?
Preparing my partner, Ben. He is a very level-headed person already, so during the birth, nothing really shocked him (except for the intensity of my labour) which freaked him out a bit. And also the mental preparation I did and the yoga. I did a lot of yoga, every second day during my pregnancy and I really needed the strength of that to support me. There is no way I could have physically done labour without yoga. 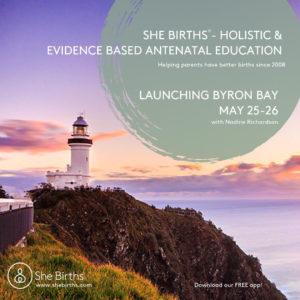 So excited to be teaching our first ever She Births® course in Byron Bay!

Over 2 amazing days ( with the help our new App) you can discover how to:

We cover everything you need to know about the birth process. Enabling you and your partner to work as a team, reduce pain & have a safer, faster delivery.

98% of our couples say She Births® allowed them to create a Beautiful Birth, no matter what unfolds.

‘It will change the way you think about birth.’

**This course has been discounted by $300 for our launch